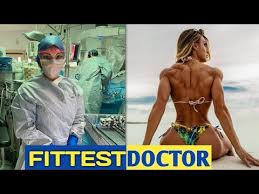 With her next big competition just around the corner, Sunny Andrews remains as focused as ever

JACKSONVILLE, FLORIDA, UNITED STATES, April 7, 2022 /EINPresswire.com/ —
With her next big competition just around the corner, Sunny Andrews remains as focused as ever on her weightlifting and bodybuilding goals. Yet, as a renowned physician, Andrews is equally committed to her endeavors as a medical professional. With that, the Canadian-born athlete and trauma surgery doctor has granted a unique insight into her day-to-day life.

Sunny Andrews was born in southern Ontario, Canada. The bodybuilder and doctor is a former student of Michigan State University, from where she graduated with qualifications in anthropology, fashion design, and a specialization in bioethics. Andrews would later go on to complete a master’s program in biomedical science at Oakland University in Michigan before being accepted to medical school.

Andrews’ studies took her to Saint Martin in the Caribbean, where she also began weightlifting and bodybuilding. She loved the bodybuilding and Caribbean lifestyles, she says and found that they were highly conducive to both her mental health and medical studies.

From Saint Martin to London, England

After leaving Saint Martin, Sunny Andrews completed clinical rotations in California, Florida, Georgia, Michigan, Virginia, Washington, D.C., and London, England. During this time, she started a fitness and nutrition consulting business where she created workout programs and meal plans for clients. The business quickly gained popularity as her clients made dramatic transformations, with some losing over 100lbs.

Andrews says it was then that she became even more passionate about bodybuilding. She recalls feeling that it was an excellent way for people to repair their relationships with food while also learning to love their physiques.

Sunny Andrews graduated from medical school in 2019. She immediately began research at the Mayo Clinic and the University of Florida focused on genomics and radiology.

Fast-forward to July 2020, and Andrews had started a surgical residency. In the days before her next big bodybuilding event, she continued to take care of her trauma surgery commitments and even completed a 24-hour shift right before the competition.

In order to compete, she had to drive for two hours to the event before getting straight on stage. Despite these hurdles, Andrews won her class. She also earned her pro card as an International Federation of Bodybuilding and Fitness athlete at the same time.

Physician and athlete Sunny Andrews competed as a professional bodybuilder a total of seven times in 2021, including at the International Federation of Bodybuilding and Fitness Olympia, where she placed sixth. Not long after, Andrews also competed at the Ben Weider Natural Pro Show, where she placed first.

On December 17, 2021, Andrews became one of just ten professional National Physique Committee and International Federation of Bodybuilding and Fitness competitors from around the world invited to compete at the Arnold Classic in Columbus, Ohio, on March 5, 2022.

Sunny Andrews: Quads on the Neufit