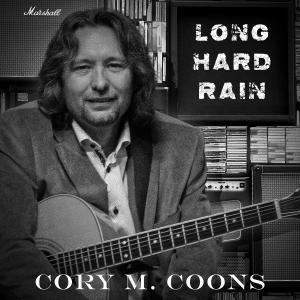 
Long Hard Rain’ gives us an impression of a tumultuous time, with a sense of foreboding, sort of like a darker cloud of emotions or energy hanging over one’s mind and spirit of things to come.
”

OTTAWA, ONTARIO, CANADA, July 21, 2022 /EINPresswire.com/ —
For many a broken heart can feel like a long hard rain as the emotional, dark clouds roll in. Cory M. Coons new single, “Long Hard Rain”, is for all the folks who have felt beaten down at one point in their lives. The lyrics depict a person who is heartbroken, spiritually or romantically. But there is still hope as they hold out for love and realize that the clouds will dissipate along with their emotional bondage.

“Long Hard Rain gives us an impression of a tumultuous time, with a sense of foreboding, sort of like a darker cloud of emotions or energy hanging over one’s mind and spirit of things to come.” – Cory M. Coons

“Long Hard Rain” was released on July 15 on MTS Records.

Cory M. Coons is a professional independent performer, musician and award-winning songwriter from Eastern Ontario, Canada, just south of Ottawa. With over 30 years of experience in music, it has been his passion since his early teens as a guitar player/bassist & singer in High School, and shortly after while traveling and performing in a variety of very popular cover bands throughout the mid-to-late 90’s in both Ontario and the United States in well known local high-energy acts such as “Heads Or Tales” and “Shake The Tree”, as well as the band “U.S”, (which toured most of the South Eastern United States in 1998’). Then later formed his own Classic-Melodic Rock influenced band “Tycoons”, releasing two independent recordings and performing throughout Eastern Ontario, Northern NY State, and Quebec in the early 2000’s.

As a Roots-Rock/Americana blend of Singer-songwriter, Cory has amassed more than 170,000 plays on Spotify for his melodic brand of roots-flavored rock. His work with famed legendary record producer Ron Nevison, has earned him industry recognition from the Los Angeles Music Awards, the Producer’s Choice Honors, The Josie Music Awards, International Singer-Songwriter Association and the Radio Music Awards, among others. With a catalog that boasts several critically-acclaimed full length albums and EPs, as well as a handful of well-received singles. Since 2004’, Cory has officially released 4 full length albums and 2 E.p’s, (with another recent E.p released in 2020), featuring the singles “Leavin” and “Good Times Gone”.

He recently released a previous album “The Long Road Home” in 2018, produced by Multi-Platinum Veteran Music Producer Ron Nevison, (Heart, Bad Company, Damn Yankees, Survivor, Styx, Night Ranger). The album was nominated in 2019 for “Male Album Of The Year” at one of the biggest Independent Award Shows in North America, the “Josie Music Awards”, and he as well had 4 nominations at the 2020 JMA’s, 3 more at the 2021 JMA’s, and is currently nominated at the upcoming 2022 JMA event again in two categories, “E.p of the Year”, & “Single of the Year” (Americana) for his song Freedom Road, this time being held in October at the Grand Ole Opry House. Cory also earned a nomination at the 2021 “International Singer Songwriter Association” (ISSA) Awards in 2021 for “International Male Vocalist of the Year”.

In 2020, Cory’s Nashville recorded E.p “33.3”, and previous album “The Long Road Home” were released on MTS Records, along with the “Share A Little Time” (E.p) and a re-issue of his “Retrospective” compilation (spanning 1999′ – 2010′). The single “Leavin” was released early in 2020, and the follow up single “Good Times Gone” was released in June of 2020, from the recent Ep “33.3”. In December of 2020, Cory released “Burning Bright at Christmas Time” on MTS Records. The enchanting blend of acoustic guitar and sleigh bells captured the spirit of the holiday, and Coons’ melodic sensibilities remain intact with another rootsy release that feels at home next to his finest releases. “Burning Bright” also featured Coons’ then, 6-year-old daughter, Charleigh, on backing vocals, giving the track a real family touch. Another independent single “Far Away” was released in early 2021, which also featured Charleigh Lynn Coons (at 7) on backing harmonies on the track, along with his single “Freedom Road” which dropped in late 2021 on MTS Records, and currently a new upcoming single is set for release on July 15th of 2022, “Long Hard Rain”, also on the MTS label.