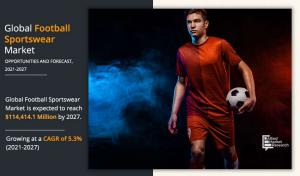 Growth in interest of people in football events, participation in sports, and increase in women football are expected to boost growth of the football sportswear market.”

On the basis of distribution channel, the brand outlets segment is estimated to reach $37,616.3 million by 2027, at a CAGR of 5.6%. Brand outlets are owned and operated by manufacturers. In this, manufactures such as Puma, Adidas, and Nike sell their own brand products through stores. People are increasingly buying products through brand outlets, owing to benefits associated with them such as heavy discounts, cheaper prices, and product availability, which are not available through distribution channels.

Football was mainly concentrated to men segment only but now-a-days women are the emerging audience for football events. Growth in advancements in football shoes has been majorly attracting men football fans and football players. Nike Mercurial Vapor Superfly II CR, Adidas F50 Adizero MiCoach, Joma Super Regate, NIKE ID- Boot Customization, ADIDAS CRAZYLIGHT, and Puma NeonLite 2.0 are some of the advanced shoes, which have gained significant traction among sportsmen. For instance, FlyWire consists of strands made from Vectran, which is thinner than human hair yet stronger than steel. These strands are placed in strategic areas to provide support and it is weightless.

Region wise, Asia-Pacific has gained considerable traction in the football sportswear market, and is expected to grow at the highest CAGR during the forecast period. Emerging economies such as India and China have gained significant popularity for football events and participation in football sports is gradually increasing. Furthermore, heavy advertisements and promotion is attracting people to buy products. Sponsorships play a vital role in building brand image, which further boost sales of football footwear and apparel. Various big brands such as Nike, Coca Cola, Barclays, Adidas, and Red Bull have been sponsoring football kits for world’s biggest clubs such as Manchester United, Barcelona, and famous national teams such as Brazil. Sportswear manufacturers are increasingly launching boots and clothing, which are signed by the world’s famous footballers such as Cristiano Ronaldo. This signed football sportswear favor growth of the football sportswear market.

Key findings of the study