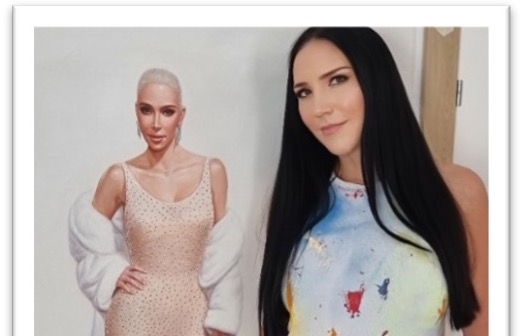 Kim is iconic in the fashion world and is no Newbie to being drenched in diamonds. She is regularly conceptualised in numerous art forms, whether its people replicating her makeup or imitating her style or designers that crown Kim their Muse.

British Artist and Designer Debbie Wingham also choose Kim K as the main focal point of her current works. The million-euro mural which is 40ft long, launched a month ago in Puerto Banus, Spain, has been given a diamond makeover worthy of a Kardashian!

The mural still embodied many of the original features including a huge graffiti wall featuring an adaption on the world renowned Las Vegas sign along with  nautical undertones, which reference the marina location, pop culture including the Beatles and everything you can think of that is associated with the jet set lifestyle which includes Rolex watches, Cartier, NFT’s and a special emphasis on super cars featuring an almost Lifesize billionaires’ toy, a LaFerrari with a series of the poshest pooches, referencing the incredible super cars at Puerto Banus but also all the beloved port side pets rocking real diamond collars.

Debbie is world renowned with power brands but also loves to curate grand installations with emerging luxury brands. In this instance she found an incredible stockist of hand-crafted dog collars from The Luxury Dog Shop in Sweden who pride themselves on fair trade, exceptional quality dog collars and leads, also available with diamonds. Other emerging creatives included in the mural are eco luxe handbag brand Pallavicini Galizia who take vintage designer materials and repurpose them into haute couture handbags and Chic back who created a fashion meets functionality fashion accessory which is basically like jewelry that adorns your back whilst giving you the support of a bra.

Wingham even enlisted help from a fellow artist to do some of the more abstract painting for the mural because her style is more realism, so Brazilian artist Nadja Rossato created a number of the abstract faces for the graffiti side of the mural.

When asked why Wingham insists on working with emerging talent instead of just the top tier brands she said – “It was only a short while ago that I was an emerging creative, hoping that someone gave me a chance and I knew that one day when I was in a position of power, I wouldn’t forget fellow creatives that deserved to be seen, therefore I always include innovative brands, especially environmental ones, I am the queen of luxury upcycling myself and I hate to see anything beautiful go to waste”. The makeover of the mural was to mark the 10-year anniversary of Wingham’s world famous dress, the one that shot her to fame.

The world-renowned black diamond dress valued at a whopping 3.5 million GBP. Wingham knew that the black diamond mural makeover had to live up to that same criterion. The mural remaster wasn’t just all diamonds it involved a style makeover and who better to represent style than the biggest fashion icon in the whole world Kim K.

An incredible life-like Kim K rocking her very own world’s most expensive dress, the Marilyn Monroe dress that she wore to the MET Gala just over a month ago.

Wingham said – “I wanted some uber relevant fashion statements and the fact that the Monroe dress had the title of one of the world’s most expensive dresses alongside mine made the perfect synergy and when you think of fashion icons, no one beats Kim in the style stakes”. Wingham also conducted an impromptu poll on the street of Marbella where the mural is located, asking whose photo people would most like to see on a mural from the whole world? Kim K was high on the list with an overwhelming 79% of votes.

The mural makeover also featured jewellery, pop art, Dogue a doggy Vogue and a simplistic graffiti vibe featuring diamonds, crowns and lips.On the launch night of the mural makeover Wingham kept the diamond vibes alive by gifting a diamond ring from London-based brand Raine to a lucky guest, the winner was determined by picking the correct key to fit a lock.

The other stars of the showcase alongside Kim K were the illustrated silhouettes which have become one of the main focal points of Wingham’s diamond mural, they also got dressed up for the occasion, specially the one next to the Ferrari which was dressed in a digital render of the black diamond dress, and real diamonds were cascading down the digital rendered gown where it laces up at the back to the tune of 1 million euros.

The diamonds were present just for one day for security reasons, but the Kim K fashion extravaganza will remain on the mural for the whole of summer so that people from around the globe will be able to capture a selfie with the Queen of pop culture herself Kim K.The image of Kim was created from an original painting Wingham created, a hyper realistic depiction of Kim’s famous curves and that perfectly contoured face. In order to withstand the sweltering Spanish heat, all the originals were photographed and digitally rendered onto the mural.

Along with all the original artworks from the mural which are to be auctioned off for various charities, The original of Kim K is set to be sent to Kim’s chosen charity Represent Justice which is an LA non-profit charity that fights for a fair legal system and to end to extreme sentencing.  A cause close to Kim’s heart which was recently showcased on The Kardashians series on Hulu.

The mural will be on display in the heart of Puerto Banus until mid-August as a hot spot of social media fans who are on the search for the perfect click.

When asked what her plans were for the future, Wingham shared how she is delighted to announce that she will be launching her new TV show “The Most Expensive…” on Gossip Stone TV in its upcoming public release this Summer.

Gossip-Stone TV is the newest celebrity news and luxury lifestyle TV channel that is coming to ROKU TV and Amazon Fire TV in the Summer of 2022. Headed by Victoria Unikel the serial entrepreneur and co-founder of 24Fashion TV and VUGA Enterprises Media Group, Gossip-Stone will deliver original and syndicated entertainment content from the most exclusive events and venues to show the 99% how the 1% truly live, work, and play.